I like this post from Michael Gilleland very much, although I feel something of a hypocrite in recommending it. Being job-free (for the present) is not unlike feeling oneself popping back into one's natural shape, like Tom moments after he's been flattened by a dustbin lid or an ironing board.
Posted by The Silver Eel at 11:09 No comments:

The King's up against it 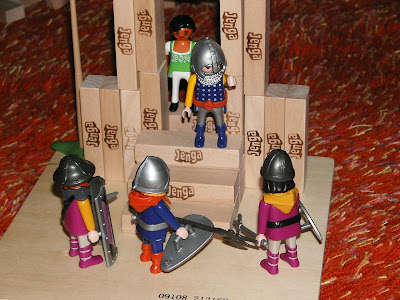 "He can't fight with a crossbow hand-to-hand, son. A crossbow's a range weapon, not a melee weapon. Get him a sword."

This is not the language in which one should talk to four year-olds, but it seems to be coming out of my mouth anyway. Once a gamer, always a gamer. Break out the d20. *Sigh*
Posted by The Silver Eel at 11:21 No comments:

God save me from my friends

David Langford, winner of multiple Hugo awards for his fiction and fan/critical/review writing, is being interviewed by a local television station during an SF convention. He is being asked about the geeky/unwashed/weird/social-misfit thing, or about poor writing or silly covers or unpronounceable names. And he goes on to give a reasoned and articulate defence of science fiction, pointing to the fine writing of Le Guin and Leiber and Ellison and Aldiss and Ballard, the classics like 1984 and Brave New World and We which the gatekeepers won't acknowledge as SF, the way SF reflects the contemporary concerns of modern society and is the only branch of fiction really to get to grips with technology as the defining force of the 20th century. He points to the number of scientists now working in their field because of the inspiration they got from people like Asimov and Clarke and Pohl. And he is beginning to wind up by saying, with a slight chuckle, "I mean, you mustn't assume that we're all - "

- and at that exact moment, someone wearing a Darth Vader mask walks behind him, repeatedly pulling the trigger of one of those guns that fires ping-pong balls and shouting "Kill! Kill! Kill!"

At which point the interviewer, and the audience, assume that we are indeed all.

(With apologies to the original teller of this anecdote in Interzone.)
Posted by The Silver Eel at 09:37 No comments:

Something about an earlier post was bugging me so I've cut it back. Whereof one cannot speak without foaming at the mouth, therefore one must be silent. Anyone who hasn't been shouted at recently is welcome to email me on the subject. Earplugs will not be supplied.
Posted by The Silver Eel at 10:21 2 comments:

In defence of anonymity...

When I began this blog, or its predecessor, in 2005, it was as little more than a response to Joe's occasional pestering encouragement. I had no idea what blogs were and didn't really see the point in trying to write one, particularly as I didn't think that my opinion really counted for much.

Four - good grief - four years on, and I get the blogging thing, and I still just about manage to write one; I do so mainly to pass on something which I think is intriguing or entertaining to whoever might pass by, or to try to figure out what I think. In other words, for the usual reasons people write, in whatever medium.

I still don't think my opinion is worth much. That's my, my opinion, the person writing this. I really don't matter to anyone who doesn't know and care about me, and I don't want to. My life is my own, and small though it is, it ain't really any of anyone else's business. But the argument, the case, the choice of words, I believe matter a great deal, and they stand and fall on their own merits.

It's a question of the voice being important, not the speaker, and in a curious and intriguing way I find the voice of 'The Silver Eel' (the blog) has taken on a life of its own. If this seems like an abdication of responsibility I can only reply that I don't think it is. The (rather thin) anonymity puts the reader's and writer's focus on what is written, and therefore encourages a greater responsibility, a greater loyalty, to the text.

Medieval copyists left their work unsigned - they worked for the glory of God. Ideally, so should writers - no names, no covers, just works.

Of course, the above could all be horseshit; I have a rotten cold which is keeping me from sleeping, and possibly from thinking very clearly as well.
Posted by The Silver Eel at 01:27 No comments:

Some years after having bought it, I am reading Michael Wood's In the Footsteps of Alexander the Great. I saw at least one episode of the TV series during its original run in 1997, and remember enjoying it. The book seems to have been worked up from Wood's TV notes; as travelogue it's pretty thin, but it seems a good introduction to the story and I'm happily eating it up. I am curious as to how Alexander beat the Persians three times - at the battles of Granicus, Issus and Gaugamela - with what to my untrained eye appears to have been exactly the same strategy: attack the right flank at its weakest point and then veer left into the body of the Persian forces. You'd have thought they'd get wise to it.
Posted by The Silver Eel at 22:42 No comments:

Free as a bird, poor as a mouse(r)

It is no great revelation to say that I was, until very recently, working for Bastardstone's, which was one of the reasons I blog anonymously and the secondary reason I didn't blog about work stuff - the main reason being that, actually, it warn't all that interesting. I prefer to focus on the things that sustain rather than those that sap.

However, in the light of my redundancy, along with a whole lot of other booksellers across the country, I am at least now free to say this:

[The body of this post has been editorially eviscerated due to excess venting of spleen. Vitriol of this kind will not be permitted. Fluffy bunny stuff like the following paragraph is okay - Ed. 05/06/09]

But it's pretty clear now that the gargoyles have not only taken over the cathedral but have started pissing on the congregation and defacing the stonework. [Guess I missed this bit. Ed.]

In fairness to Bastardstone's, they are still trading where Ottokar's and Thin's aren't. But I can't help thinking of Mother Courage.

One of the good things about working from home (and anyone who thinks looking for work isn't work in itself has either never done it, or isn't doing it hard enough) is that I've been listening to a lot more of WSER. It's bloody good.
Posted by The Silver Eel at 23:16 No comments:

The Silver Eel
There is nothing - absolutely nothing - half so much worth doing as simply messing about in books. Born in Inverness; grew up in Scotland, England and Canada. Have lived mostly in and around Edinburgh since 1990.